Vincent Waltz, often referred to simply as Waltz, is a character and the primary antagonist in Dying Light 2 Stay Human.

Dr. Waltz was a scientist working with the Global Relief Effort. He later married an unknown woman and had a child named Mia.

Waltz experimented with THV on young children, hoping to both create a perfect bioweapon that made a host merge with the virus without killing or turning the host and create a vaccine to battle a mutated variant of the pathogen. Eventually, he was later fired by the GRE when they realized about his experimentations was unethical and unmoral but it was too late as THV soon brought civilization to its knees leading to the annihilation of a huge part of the human population leading to the Fall.

After the Fall, Waltz allies himself with Colonel Williams who was the leader of the Renegades and set up his main base in a GRE laboratory where he began experimenting once again with the THV to other Renegades and eventually himself. He later betrays Williams and convinced some members of the Renegades he experimented on to be loyal to him. Waltz then started looking for the rare GRE key that can gain him access to a abandoned but functional facility called X13 so he can cure his daughter Mia from a strain of the virus so he hires a Peacekeeper commander named Lucas to search for it. The former GRE doctor also became infected with a strain of THV during his experimentations which granted him superhuman abilities but with the consequence of also having the instinct of a infected particularly the Volatile.

When Lucas finally found the GRE key, Waltz sent a former nightrunner named Hakon to kill Lucas and give the key to him but was stolen by Dylan who knew of the consequences of the doctor’s actions once he has the key. Waltz and the rest of his Renegades soon chase Dylan.

Waltz was introduced when Aiden mentions him to Spike in the outskirts of Villedor after Spike asked the reason why Aiden wants to go to the last bastion of humankind. He is first seen in a dream of the past by Aiden when he was working with the GRE during the child experimentations in the city before the Fall. Waltz is then seen by Aiden in the present, killing a defector from the city named Dylan in the metro systems after he stole the GRE key from the doctor. Waltz eventually sees Aiden and orders his men to capture him but fails once Aiden evades the Renegades.

Waltz is soon mentioned in the Missing Persons quest by bandits working for the doctor that he is looking for the GRE key but he is once again mentioned by Hakon when it was revealed that the former Nightrunner was forced in working for Waltz by killing Commander Lucas who had the key.

Aiden encounters Waltz when he was entering the Central Loop through a tunnel after he attacked him and some Peacekeepers including the commander of Old Town, Aitor. The GRE key was then stolen by Waltz from Aiden and he heads towards an abandoned car factory to activate a old world console using it. Aiden later arrives in the same factory controlled by Waltz’s men after easily dispatching or sneaking pass the Renegades until reaching him. He attacks Waltz but he is easily overpowered by him and is almost choked to death until he was shot by Lawan. Aiden takes the GRE key and then successfully escapes Waltz with Lawan who has now gained superhuman abilities comparable to a Volatile.

Waltz sends his Renegades to invade the Central Loop but the attack fails. However, his attack also made his former ally now turned enemy, Colonel Williams, a main enemy for both the Peacekeepers and Survivors after deceiving them into thinking that the Renegades were sent by Williams.

Aiden gets in contact with Veronika Ryan and the two meet at the GRE Observatory where Aiden thinks he can find information on Mia. Where Waltz and his Renegades are looking for the two. Waltz finds Veronika while Aiden is fighting Renegades and tries to get the key from her, Aiden arrives and the two run away from Waltz but Waltz catches up and fights Aiden. Waltz throws Aiden and he begins to turn and kills Veronika, Waltz gets the GRE key from Veronika´s corpse befpre launching a missile strike destroying large sections of the city and covering them in fog.

With Waltz in possesion of the key, he can finally execute his plan of going to X13 and destroying the city to save his daughter Mia, who Aiden had been looking for thinking she was his sister. Aiden came to X13 with/without Hakon but Lawan meets him there too, despite Aiden telling her to leave Lawan stays and finds where the missiles are located along with many explosives that can only be detonated manually.

Aiden confronts Waltz and the two fight until Aiden defeats Waltz, Mia comes out and tries to give Aiden the key but Waltz knocks it out of his hand into chemicals, ultimately destroying it. Mia falls and goes unconscious, Mia is taken to a bed where she is resuscitated and Aiden is contacted by Lawan where she says she can detonate the explosives to stop the missile strike. Aiden is given a choice to either go after Lawan to stop her from detonating the missiles or take Mia while Lawan detonates the missiles (depending on player choice, Hakon will save her from dying in the explosion). No matter what Mia dies and Waltz´s fate is left unknown as he is still breathing

Aiden was one of the many children Waltz had experimented on, the drugs given to Aiden had the strongest effect on him and is the reason for his superhuman strength. As a child Aiden and Waltz seemed to have a good relationship but during the events of the game, Aiden despises Waltz and remembers being tortured with his sister Mia.

Waltz is Mia's father. Waltz cares for Mia a lot but it is unknown if she returns the favor.

Lawan hates Waltz for experimenting on her and he is high on her kill list. 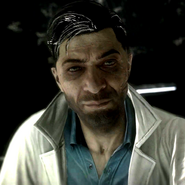