UV Light
The Volatile[1][2][3] is an uncommon Infected-type in Dying Light and Dying Light 2 Stay Human.

The Volatile is an infected that only emerges at night.[2] Most infected can be easily killed when encountered by the player, however, this is not the case with Volatiles, and the player's best options when confronted by one or more of these monsters is to run to the nearest Safe Zone, preferably before the creatures know they’re there. Volatiles are capable of taking several hits from high powered weapons and can quickly cause significant amounts of damage.[2]

Volatiles are broad-shouldered and slightly taller than the average Biter. Other physical markers include full-bodied nudity, exposed bone and muscle and a mandible jaw that it uses against non-infected humans. They can audibly be identified by their heavy breathing and loud screeches. Volatiles are extremely fast, and can navigate through the dark at high speeds, matching the agility of the player perfectly, scaling obstacles and buildings in the same manner.[3] They have a special pounce attack that is very unlikely for low-level players to escape from. However, after First Assignment, you will get a UV flashlight which can be equipped and used when a volatile pounces, pushing them back and giving you enough time to escape. Players at higher levels with the appropriate skill can shake their attacks off relatively easily, but a low level player will need an incredibly powerful weapon in order to have any chance of survival. In the event that a Volatile can see a player but not reach them, they will use a powerful spit attack similar to those employed by Toads. They often do this while the player is climbing to knock them off a ledge.

When time progresses to day, Volatiles will become frightened and start running to the nearest dark zone such as a tunnel or cave. While running for shade, Volatiles will always ignore the player, even if they attack them, until they reach a dark zone, where they will become as aggressive as they are during the night. If one were to chase a fleeing Volatile at sunrise, you can sometimes see them die from the sun before making it to a dark area.

Volatiles also make their appearance in the Countryside. Mainly located in caves or dark train tunnels. At night they can prove very difficult to evade or hide from as the Contryside is vast and has sparse areas to hide in. When Crane uses the Buggy at night, their vision cones turn from 75° to a full 360° and can be alerted quicker. When in a pursuit, the Volatiles appear to have increased dexterity in their legs, allowing them to run much faster than they would normally. Their speed appear to match that of the buggy at 70 MPH.

Similar to the first game, Volatiles are VERY dangerous. They are mainly encountered during a level 3 chase and when going into dark zones during the day. Volatiles are meant to be avoided rather than fought as they are fast, hard to stun, have high health, and deal extremely high damage. Despite their danger, they can be killed, but a player will need to stay keenly aware of the volatile in order to dodge its attack. This is easier done when a volatile is isolated, but they will often be among virals or even other volatiles. It is recommended to not try to approach one without proper UV gear in case you need to escape. If killed, their bodies typically yield purple-tier treasure and a unique infected trophy.

Evolved Volatiles[4] are an evolution of the uncommon Volatile introduced with the release Dying Light: The Following. They can be encountered anywhere where their lesser variants roam. Compared to its normal counterpart, Evolved Volatiles[4] are arachnoidian in appearance, with more prominent fangs, a spiked carapace, and inky-black growths over its skin resulting in an even less human appearance than the normal variants. They are faster, stronger and more resistant against melee weapons and especially firearms, such as military rifles and pistols due to their unique body armor similar to that of a demolisher. Their hits inflict more damage, they can pounce further, and they can notice you through camouflage/cloak potions. They are also far more reliant on their highly accurate and highly damaging spit attacks, making them extremely difficult to escape from. Fortunately, they suffer from the same weakness as normal Volatiles — their vulnerability to UV light can allow players to blind them and hold them at bay for a brief moment. The best way to deal with these Volatiles[4] is to simply avoid them where possible, use UV traps, UV flares and UV flashlight.

Ice Volatiles are the last known variant of the normal Volatile, they can be encountered anywhere where their lesser variants roam but are way more prominent at pursuit level 3 - 4. Compared to its normal counterpart, Ice Volatiles have crystallized ice protecting their body much like a Blue Volatile but with crystals, and have a spiked carapace, prominent fangs and icy growths over it's body. Their eyes grow a bright cyan and they leave pieces of crystallized ice when running. They have the same vulnerability to UV light as both their other variants.

The Volatile Tyrant is a special variant of Volatile found mainly in the Central Loop of Villedor. They can be encountered in Old Villedor as well, but mostly confined to the Volatile gestation stage. Their bodies and sores glow a deep red, which differentiates them from normal Volatiles. Tyrants can be encountered in any Encounter while in Downtown Villedor, and can be avoided with ease, however engaging one will yield the high tier loot associated with Volatiles.

While still employing many of the same tactics as normal Volatiles, Volatile Tyrants are much more powerful, in addition to their enhanced speed. When engaging a Tyrant, it is best to keep an area constantly lit by UV lights and attacking from the safe area. While this method is effective, Tyrants can pounce on the player even if the light is present. Volatile Tyrants can also be seen in Old Villedor in GRE Quarantine Buildings. While they can be encountered, they will remain in a vegetative state, still developing into a Volatile, and will most likely be guarded by 2-3 base Volatiles. These encounters are bountiful, but preparation and a strategy is required to survive an encounter.

Recommended items to use in a scuffle with a Tyrant include Muscle Boosters, Endurance Boosters, the highest level UV Bars the player has access to, Military Medkits, and Boomsticks, if backed into a corner.

Volatiles have around 2,000 health, requiring high-damaging weapons to kill them. Later in the game, weapons such as shotguns, short swords, machetes, and knives work extremely well against Volatiles because of the amount of damage per hit. Volatiles are quickly dispatched when using these weapons, making for good Power XP, 1,000 for Volatiles and 1,500 for Blues, but can still prove problematic as fighting multiple can lead you to take some hits, especially if one pounces you. It is recommended to use flares when fighting a group, as this gives you an area to stop and regain stamina or switch weapons. Volatiles will spit at you if you are in an area they can't reach, or if you're far from them. The spit can quickly drain your health, especially if there are multiple Volatiles. Fighting Volatiles can also cause multiple Night Walkers to show up, distracting you from fighting them if not dispatched first. 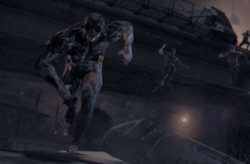 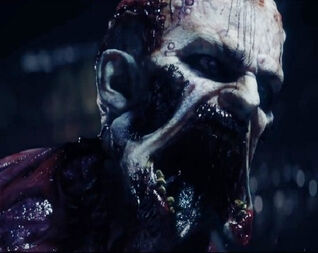 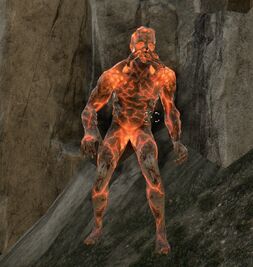 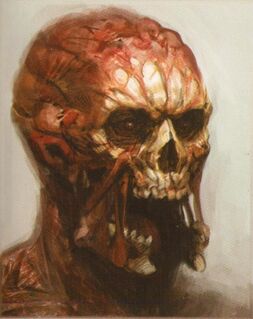 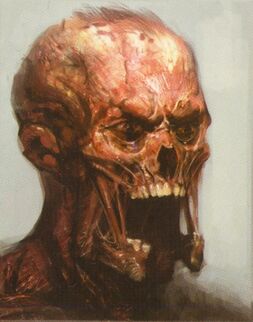 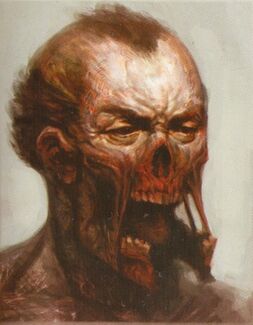 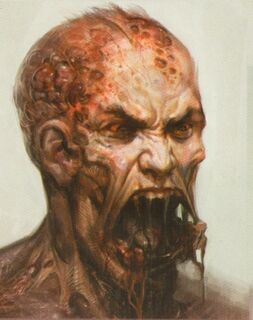 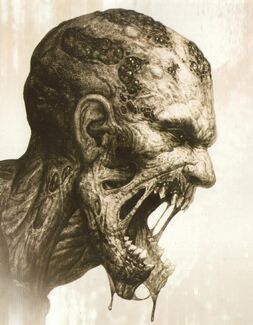 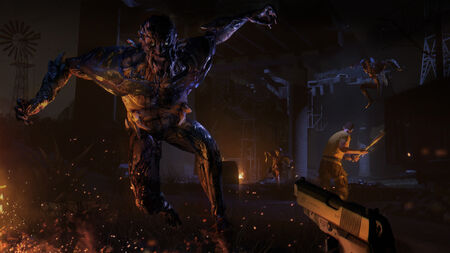 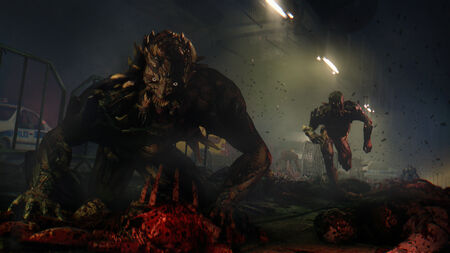 The Following screenshot of two blue Volatiles, one feasting on a dead body while the other is shown running

volatile pouncing on the player 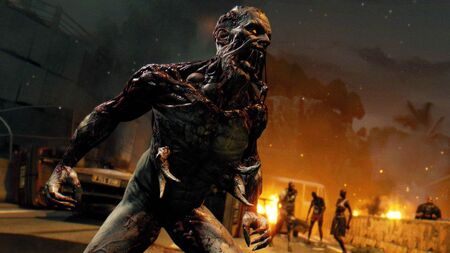 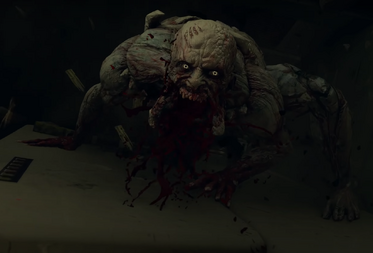 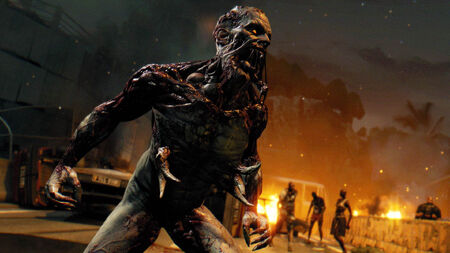