Toygar is a character featured in Dying Light.

He is a resident of the Tower and can be found in the lobby. He will appear by the bulletin board after Kyle Crane begins working for Kadir "Rais" Suleiman. He posts a total of five quests on the board which Crane may complete.

Firstly, he requests that someone retrieve herbs in order to combat the stench of rotting corpses. Next, he asks that a runner bring back lighter gas for him, before requesting coffee to help keep the guards awake. He then asks for electronic parts, and then for gauze to treat the wounded. 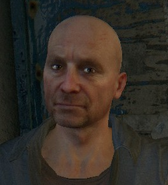 Retrieved from "https://dyinglight.fandom.com/wiki/Toygar?oldid=24718"
Community content is available under CC-BY-SA unless otherwise noted.