The Tower is a location in the Slums within Harran in Dying Light.

It is controlled by Brecken and his runner faction who helps take in infected survivors, including Kyle Crane. It is recommended to check back at the Tower throughout your play-through; as new Quests unlock for different NPC's located within it, at different times. The residents leave notes on a bulletin board on the first floor, and Crane can optionally choose to fulfill their requests. The Tower would be destroyed if the player chooses the Nuclear Ending in The Following.

The Tower is a large residential building comprised of small apartments. The primary residents consist of survivors and the Runners who are trained by parkour instructors to traverse the city to do important missions for the occupants of the Tower. Infected individuals in the tower are given a number depending on their time of arrival to specify their "place in line" for Antizin.

The Tower is heavily guarded by volunteers armed with firearms; the stairs connecting the ground level to the first floor were destroyed to prevent easy access for the Infected. Additional security exists in the form of electric fence traps and Ultraviolet lamps at each entrance/exit.

By completing story missions and side quests, many changes will occur within the Tower. For example after some side quests where the player must aid survivors and bring them to the tower, they will be able to see them walking around within the Tower. This tells the player that the quests actually mean something and will impact the world.

Buckshot, the trainer of the guards, asks Crane to film a small presentation of his skill in combat, which he will use as a reference when training other guards. Crane is filmed in combat wielding a baseball bat and later using throwing stars. After completing his challenges, Buckshot brings four other guards into the lower store to view the footage. The guards can be heard commenting on Crane's flawless technique, and compare their actions to his.

Alexei and Kristov join the Tower survivors later on. Kristov became annoyed by the fact that they had to work and make weapons for Rais, so he left his father to become a Tower runner. After a semi-successful first run, Crane convinces him to give up his Runner position to make weapons for the Tower survivors, as he did for Rais’s men. Alexei later agrees to join his son in the safety of the Tower after Rais’s thugs invade their radio tower holdout, proving that their defences were not enough. They can be found around the lower level of the Tower, and sometimes inside Alfie’s workshop, crafting machetes.

The children start to feel bored and restless, so Kate leaves a note for a Runner to retrieve five packets of crayons to occupy them. When Crane gives them to Kate, she thanks him for his efforts, and with their new crayons, the children draw creative images on the walls of floor 20, such as a happy chicken on top of an apple tree; A blue Diplodocus which is being abducted by a UFO under a rainbow; Outer space with planets, stars, and a spaceship, and a fox and bear meeting in the forest at night.

"First, go change your clothes. I left some new ones for you in your room. You're in 194."
—Rahim

194 is the personal bedroom, trophy room and storage area of Kyle Crane, assigned to him by Rahim. It is located on the nineteenth floor, on the right side of the elevator and opposite the Store. Above the doorway is a graffiti message which reads: "GUARDS", and usually has a guard sitting in a chair just outside. Through that door, past the bathroom and into the right door is where Crane's room is. Over the course of Crane's stay in Harran, he will participate in many quests for the survivors of the outbreak. When completed, Crane will sometimes keep a memento of the quest to remind him of it. Leaning against a gas heater is a guitar which can be used, but only two different notes are played (however, you may find a guitar lessons book at the School to play it properly). A desk has space for many items, and has a pin board where Crane pins images of the various 'special' infected he encounters along side a nametag, such as the Goon, Bolter, Volatile and so on.

"If you're going to earn your keep, we've got to find out if you've got the skills. So get your ass up to the gym."
—Rahim

The "Gym" is another skyscraper beside the Tower, which the Tower survivors use to train their Runners. It is accessible via a Tower crane, and was still under construction before the outbreak. To enter the gym, a leap of faith from the crane is needed, as this introduces the break falling feature. When jumping off the crane, the Runner will land on an assortment of garbage bags and mattresses.

"See, we're going to start a vegetable garden on the roof - y'know, so we can maybe not starve to death - but nobody here really knows how to do it. "
—Khaliq 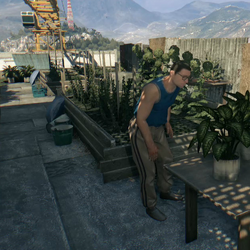 Khaliq places a request on the notice board for a runner to retrieve "several important items" for him, and one of the items turns out to be a Gardening book. When Crane retrieves it from Khaliq's pre-outbreak apartment, the Tower survivors use it to make a Roof garden. They convert a previously open space into an open-air produce garden, and utilize the space efficiently. Air vents or ducts are turned into produce holders; makeshift fences are raised, which will prevent wind impeding growth; buckets and metal laundry baskets are strewn across the roof, which is used to collect rainfall for the plants and drinking, and the farm is constantly supervised by Khaliq -with his new glasses- who also sleeps there at night. It is not expressed how they got the seeds and grain to make the Roof farm, but it can be assumed that they either had some already or used capable runners to collect them.
Retrieved from "https://dyinglight.fandom.com/wiki/The_Tower?oldid=26755"
Community content is available under CC-BY-SA unless otherwise noted.