Tahir, contains plot and/or ending details of Dying Light and all its related media. Proceed at your own discretion.

Throat slit with his machete by Kyle Crane.

Tahir is a character featured in Dying Light. He serves as the Secondary Antagonist of the game.

During a random encounter with the survivor Ibrahim, it is revealed that Tahir had served time in prison for a number of years prior to the outbreak. Ibrahim recalled when a gang of five inmates attempted to kill Tahir, but instead he brutally killed them in defence. Some of the inmates could only be identified through dental records. Ibrahim described Tahir as a "beast in the shape of a man."

He is the right-hand man of criminal warlord Kadir "Rais" Suleiman, based in the Garrison within the slums. Operating as his enforcer, Tahir kept Rais' thugs in line and ensured they followed orders.

He first appears during the main story quest Awakening, in which he and a few other thugs confront Kyle Crane immediately after his airdrop into Harran. Crane attempts to warn them off with a handgun, but the shot attracts infected and they are all forced to flee. While Crane is bitten, he is rescued by Jade Aldemir and brought to the Tower.

Tahir next appears during Pact With Rais, when Crane arrives at the Garrison in the hopes of bartering with Rais for Antizin. However, Rais is busy dealing with Osman and so Tahir holds him back, nearly recognising Crane. Rais directs Crane to his quartermaster Karim, who provides him with a series of tasks to complete.

Later, Kyle meets with Jade during the quest Siblings to investigate the Harran Public School. They witness Tahir execute a number of hostages and learn that his thugs are hauling out cases of dynamite that had been stored at the school. When Crane and Aldemir infiltrate the school, they engage a number of thugs in combat, though Tahir has already left the area.

Finally, during the quest The Museum, Tahir is sent to kill Kyle following the death of Jade. After his thugs are wiped out, Tahir is found mortally wounded against a pillar. Kyle retrieves some of Zere's research before killing Tahir with his own machete.

Tahir makes his appearance as a towering individual; he is even taller than Crane. He is shown wearing painted armor with a bullet chain necklace, one glove on his hand, bands around his wrist, cargo pants and knee-pads, and combat boots. He also has enormous strength, being able to knock down and temporarily stun the player. Tahir is indicated to be middle-aged, having streaks of grey in his black hair, as well as having a trimmed beard and short hair.

He has an undying loyalty to Rais, and also has a sadistic, violent personality, as shown in the beginning of the game, when he tells his subordinates to break Kyle's legs.

Tahir serves as the game's second major boss fight, and is fought at the end of the main quest The Museum, near the end of the game. As with the earlier fight with the Demolisher during The Pit, the player's weapons and equipment are removed just prior to facing him. As a result, there is no way to heal in the middle of the fight as the player's medkits have been removed.

Tahir has an impressive 2000 health (on par with a Volatile or level 3 Goon) and wields a personal military machete, as well as throwing knives. Defeating him requires about 13 hits from the player's given panga machete. Tahir fights similar to Rais' other soldiers, although his fighting style is slightly different to reflect his larger physique. He is very skilled at blocking attacks, and will toss throwing knives if the player dodges out of melee range. When his health is reduced to about half, he will summon several of Rais' Men into the room to assist him; however, these opponents can be dispatched with a couple hits each from the player's machete, and Tahir tends to hang back and slowly approach the player instead of rushing in alongside his men.

During the boss fight, leveled weapons can be looted from the two duffle bags in the room. If the player is at a sufficient Survivor level, these weapons can be significantly stronger than the given panga machete and make the boss fight much easier. At the maximum Survivor Level of 25, random looted weapons will have a damage output of 600 to 700 and can kill Tahir in as little as 3 hits (though the player will still have to get past Tahir's blocks to land the hits). 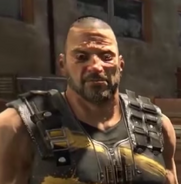 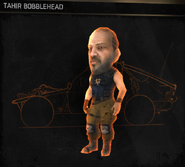 Tahir's bobblehead in The Following.

Add a photo to this gallery
Retrieved from "https://dyinglight.fandom.com/wiki/Tahir?oldid=27124"
Community content is available under CC-BY-SA unless otherwise noted.