Spitter are monster that has ability somewhat similar to Toad from Dying Light, that is ability to fire yellow acidic phlegm that deal damage to the player character, with the additional ability to spray the area in front of them with said phlegm if Aiden comes close. However, they're easy to deal with if you use a ranged attack against the Spitter or if you quickly attack it while sneaking up on it, due to their range of health being similar to a biter. 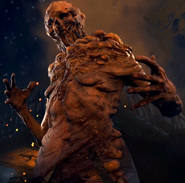 Spitter in the Trailer.