Savvy, contains plot and/or ending details of Dying Light and all its related media. Proceed at your own discretion.

Savvy is a character featured in Dying Light.

He is a member of the Embers and resides within the Embers' Tower, a church tower under construction at the time of the outbreak. He is an expert in technology, and uses that to the advantage of the Embers.

He first appears during the main story quest Find the Embers, after Kyle Crane enters Old Town for the first time and makes contact with the Embers. Crane arrives at the tower and Savvy informs Crane that Kadir "Rais" Suleiman has sent his thugs to the district, with the bandits having established outposts at an office building and a radio station.

Following the quest The Museum, Savvy manages to develop an amplifier device for Kyle to install on the tallest antennae tower outside Harran and provides instructions over the radio to Kyle on how to reach the tower and install the amplifier in the quest Broadcast. 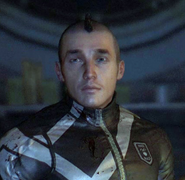 Retrieved from "https://dyinglight.fandom.com/wiki/Savvy?oldid=21717"
Community content is available under CC-BY-SA unless otherwise noted.