Rahim Aldemir, contains plot and/or ending details of Dying Light and all its related media. Proceed at your own discretion.

Neck snapped by Kyle Crane after getting bitten on the leg by an Infected and turning into a Viral.

Rahim Aldemir is a main character featured in Dying Light.

He is a native of Harran and the younger brother of world kickboxing champion Jade Aldemir, also known as "The Scorpion". Prior to the outbreak, he had plans on traveling to the United States, but they were interrupted by the virus and ensuing chaos. Jade also mentions during an argument that their mother passed away sometime before the arrival of Kyle Crane.

He assists Harris Brecken, leader of the survivors residing inside the Tower, with managing the runners and scouts as well as planning operations. Though skilled in parkour, his protective older sister forbids him from leaving the Tower and participating in missions, much to his chagrin. Instead, he assists in training runners at an obstacle course established in the neighboring apartment building, which was still being constructed when the outbreak occurred.

During the main story quest Awakening, after Crane is rescued and brought to the Tower, he is directed to meet with the leader in the control room. Once there, Crane finds Rahim and assumes him to be in command. After a tense confrontation over Kyle's radio, Rahim returns it and sends him down to the thirteenth floor to make contact with Mark, a survivor with whom he has lost radio contact. After Crane rescues Mark and protects him long enough for Lena and Timur to collect him, Rahim admits he may have misjudged Kyle and calls him back up.

He will be found talking to Alfie, the Tower's electrician, but is interrupted by Jade, angry after discovering his plan to travel to a nearby Volatile nest and destroy it using explosives. After she leaves, Rahim directs Kyle to his room and tells him to change his outfit into something more suitable for a job Brecken has in mind. Afterwards, the younger Aldemir invites Crane to the rooftop of the neighboring apartment building; still under construction when the outbreak occurred, the runners have converted it into an obstacle and training course for their parkour abilities. Rahim challenges Kyle to the course, and is eventually impressed with the results.

Later, Rahim and another runner named Omar take dynamite and leave the Tower intent on destroying the Volatile nest. Unfortunately, they are swarmed on the overpass and Omar is killed, while Rahim is driven into a nearby warehouse. Crane locates him sheltering in a train car, and Rahim urges Crane to continue the mission for him while he remains hidden. Kyle agrees and is able to destroy the nest, but finds that Rahim has turned into a Viral; having been bitten on the overpass, he lied to Crane in the hopes he would complete the objective. Crane is forced to kill Rahim by snapping his neck.

When Jade discovers the news, she blames Crane for her brother's death and flees the Tower. Crane is unable to reconnect with her again until they have both traveled into Old Town and made contact with the Embers.

During the story mission, Siblings. He was bitten in the knee by a Infected, when Kyle sees this, Rahim lies and explains that he got cut just for Kyle to plan the bomb to the nest.

After Kyle gets back from exploding the nest, he goes to where Rahim is to find out that he has turned into a viral. Kyle, confused and distraught, puts down infected Rahim.

Rahim is a slim young man with short black hair and green eyes. He is shown wearing a torn short-sleeve shirt over a long-sleeve shirt, with the outline of a fist designed on the front. He wears dark brown cargo pants with knee-pads and combat boots. He is quite recognisable by the goggles he wears on his head.

Rahim is initially standoffish during his first encounter with Crane, viewing him as an outsider and possibly blaming him for the death of Amir. However, he is later impressed by Crane's abilities and actions and develops a close bond with the undercover operative. In his interactions with Crane, Rahim is often assertive, confident and excitable. He plans a daring attack on a Volatile nest which dangerously utilises explosives. When confronted by his older sister, however, he acts more stubborn. Rahim has at his disposal an arsenal of optimistic behavior, as he always tells jokes and looks at trouble with a broad smile on his face. He is very confident in his actions, but he borders on arrogance, a trait that lands him in trouble.

He shows a great disdain for Volatiles, and is almost constantly monitoring one of their nearby nests from the rooftop of the Tower or his balcony. Though warned by his sister and others not to carry out his plan of destroying the nest, he convinced another runner to go with him and they were both killed as a result. 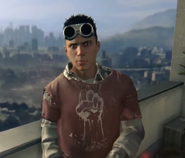 Rahim on a balcony in the Tower.

Rahim, called Rakim, in an earlier version of Dying Light.

An infected Rahim before being killed by Crane during the main quest Siblings.