"Someone's got to do something about that guy."
—Musa regarding Shakur.

Musa is a character featured in Dying Light.

He is a survivor residing within the Fishermen's Village in the slums of Harran. He guards the fortified wall and produces weapons for the group.

During the main story quest Pact With Rais, Kyle Crane discovers the village swarmed with infected. After securing the gate and clearing the village, Crane may speak with Musa, who accuses a nearby survivor of sabotaging the village, initiating the Gas Mask Man side-quest.

Crane meets with Shakur, the alleged saboteur, who denies the charges; claiming the know the true culprit, he withholds the information until Kyle brings him his Treasure Bag, lost at the bottom of a nearby lake. Once returned to him, Shakur admits he does not know the suspect's identity, but reveals a resident within the Fishermen's Village sabotaged the gate while wearing a gas mask in an effort to frame him for the crime. Back at the village, Crane discovers the village leader Gursel to be responsible, and later speaks to Musa to say "Gas Mask Man" will not cause problems for the village anymore. Musa rewards Kyle with a weapon mod.

Later, he posts a request on the notice board requesting Wolf's Bane, so he may poison the blades of his weapon builds. 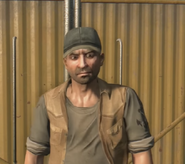 Retrieved from "https://dyinglight.fandom.com/wiki/Musa?oldid=21791"
Community content is available under CC-BY-SA unless otherwise noted.