For the infected enemies in Dying Light, see Infected.

The Monsters of Dying Light 2 Stay Human are humans who have infected with THV, a new variant of Harran Virus and turned into cannibalistic creatures.[1] In Dying Light 2, set decades after the events of Dying Light, many survivors in The City are infected and run the risk of turning into a monster if they don't stave off the infection.

Senior game designer Tymon Smektala revealed that in Dying Light 2 Stay Human, they have added the concept of "infected life cycle", which basically adds stages of infection to monsters.[2]

The Viral is an initial state in which the infected is becoming. The Viral is someone who has just been bitten and has just become infected, so they still show traces of humanity, and at this point, they are very fast, very dangerous: they avoid the sun at all costs.

After a while as a Viral, they become Biters, who are basically regular zombies; slowly infected that, if possible, will try to grab you and infect/eat you, but sunlight is dangerous to them, and they are not as fast and agile as the Viral.

The Degenerate is a final stage of 'evolution' for the Viral; Decaying zombies that are very weak with pieces of meat that fall off them. The more sunlight the Biters received, the weaker they will become. In other words, the longer they live with the infection, the weaker they will become, unless they can avoid the sun's UV rays. They really aren't that dangerous for you, but you still have to be alert because Dying Light 2 Stay Human is a systemic game, many things happen in an emergent way.

The volatile is an alternative route of evolution for those infected. Volatiles are the penultimate stage of evolution in the infected life cycle. Extremely dangerous and agile, it is recommended to sneak around one or more volatile, since alerting one will make them indicate your position to others. Depending on the player's agility tree, you can overcome most of the volatiles in environments with many side streets, alleys, obstacles and traps. However, when it comes to open areas, the Volatile will find it much easier to reach the player. When it comes to weapons to combat highly infected predators, most high-level machetes and shotguns work best to dispatch them in the first game. However, in the second game, volatiles are significantly stronger and take more effort to kill. Trying to fight more than one at a time is a good way to die brutality. An effective one-shot kill would be using block charge to charge a volatile off a roof, which won't harm you in the process. If one does not have this skill, another good way to fight them would to make tons of UV bars and throw them occasionally to keep it stunned, whilst hitting it with a one handed weapon, two handed weapons take too long to swing and take more stamina, which is a detriment because you have to constantly dodge attacks. Try getting Military Medkits for fast healing and near full health refills. After a short while of attacking, assuming you haven't died, you have now killed your first volatile.

Concept Art of a infected Peacekeeper. 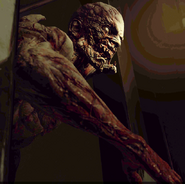 A group of monsters.

A group of monsters in The City.