The Korek Machete is a melee weapon that appears in Dying Light.

The name Korek is the nickname of Techland's optimization lead. The blueprint can be considered an Easter Egg blueprint. It is located on the rooftop of a building north-west of Stuffed Turtle safe zone. You need to find a wooden box with a drawing of a pink bunny on it, jump on it and then drop in the hole in between boxes and a wall. Inside there's a blue box appearing like an GRE-styled box.

You need to kick the box (on Xbox and PS4) or press the Action button (on PC) 75 times to make the box open. The player character will speak every 15 kicks or 16 kicks on the last set, after which the box will open revealing the blueprint inside.

The machete is the best weapon that can be found until about Survival level 18. It cannot be modified or repaired. Up to 4 upgrades can be used on it. Can be rebuilt from a blueprint by using 10 alcohol and 20 metal parts. Although the blueprint is depicted as a Legendary (Orange) blueprint, the weapon actually appears as a common (White) weapon.

Note that this weapon cannot be used in Nightmare mode.

The weapon does a one hit for the first 35 hits, then after that it's a three hit kill.

This weapon is one of the best weapons that can crafted in the game as it does a large amount of damage and is generally a one hit kill. Although when broken the damage is reduced to 10% of original value, like all other weapons.

"Developers like to cheat when playing their own games. Korek likes to have everything under control. And this is his tool."

The blueprints for this weapon can be found on the rooftop of the 'Underground Parking' quarantine zone north west of the Stuffed Turtle quarantine zone, north of the slums.

Note that on PC you have to press the action button ('F' by default) instead of kicking the box. 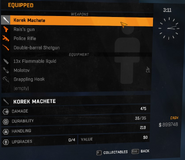 Add a photo to this gallery
Retrieved from "https://dyinglight.fandom.com/wiki/Korek_Machete?oldid=26453"
Community content is available under CC-BY-SA unless otherwise noted.