"WARNING: PRE-RELEASE ALERT. Use Caution and watch out for the novelization signals."

Jade Aldemir, contains Dying Light plot/gameplay details detailed or presented during the pre-release footage of the game and may have become outdated.

"It's nearly sunset, so move it if you don't want to get caught!"
—Jade

Jade Aldemir is a major character in Dying Light. She is a runner for The Tower by securing airdrops in The Slums. She was once known as the popular kickboxer "The Scorpion" before the outbreak occurred.

In the beginning, she first appeared to Kyle Crane's assistance alongside Amir, after Tahir and his men fled from the approaching infected. While Amir was helping Crane to get up, Jade jumped onto a biter and killed it with a stomp before helping Crane and Amir get to safety. In the process, Amir was killed by the infected and Jade radioed in assistance from The Tower.

After Awakening is completed, Jade tells Rahim about his plan involving explosives being dangerous, much to Rahim's displeasure. Crane, wanting to thank her for saving his life, tells him to prevent her brother from doing his explosive-involved plan.

The next morning, Spike notifies Crane that Jade called in all of the runners, including him, and tells him to go to The Tower. Inside, Jade talks to him about Brecken's mission failing due to the infected and Rais's Men beating him, and urges him to back her up by having Brecken stay in The Tower to recover from his wounds. Crane compromises with Brecken about the mission, and she tells him to look for the drop in the Cauldron section of the Slums.

In Airdrop, Crane finds the first airdrop with no success of supplies, before seeing the supply plane sending two more airdrops to different locations. When he finds a scared child hiding in a closet inside a building after saving her from a biter, she reminds Crane to focus on the job at hand, and says that she will find the girl before sunset. While one of the drops was unfortunately reached by Rais's Men first, she tells him to find the other airdrop as soon as possible due to night approaching soon. After he clears the infected from the airdrop, Crane (under the influence of the GRE) lies to Jade about the airdrop having no Antizin, much to Jade's displeasure. She also tells him that the Volatiles are awake, in which he is chased by the infected back to Brecken's Tower. Upon returning, she is seen in a meeting with Brecken, opted to go to Rais for Antizin much to Brecken's disagreeing. When Crane appears and opts for the job, she and the others accept this and is joined in with everyone else leaving when Brecken asks to give the room to him and Crane.

During Pact with Rais, she radios Crane after the meeting about how she appreciates him helping out, and she knows that he is doing this to redeem himself after Amir died saving him. She also reveals that she met Amir after the outbreak, being a decent man despite not knowing him for too long. She tells him that she doesn't blame him, due to Amir knowing about the risk, and that she knows that he's taking a risk to do the job for Brecken's Tower. After Crane tells her that he'll contact her once he gets the Antizin, she understands and hopes that he can come back in one piece. Later, upon Crane's return to The Tower with little Antizin from Rais, he gives the Antizin to Jade when she tells him about Brecken wanting to save as many lives as possible, but the situation got worsened and resulted in losing the 18th floor. She goes to Lena to give her the Antizin while Crane speaks to Brecken. Later, she messages him about the Slums School being used by Rais and thinks that there could be more Antizin stored there, requiring his help to infiltrate for the mission.

In Siblings, she is found inside a train boxcar and gives Crane the information; the school is being used by Rais's Men who have been hauling supplies out of the school for hours, prompting her to take a closer look inside. Before heading inside, they both witness Tahir murdering some hostages outside the school, resulting in Jade recommending to take different entrances to inside to cover more ground and make less noise separately. Once inside, the two pry open a crate filled with explosives and find themselves shocked. While Crane deals with the bandits, Jade takes the explosives back to Brecken's Tower and tells him not to let Rahim near the Volatile-filled hive. Afterwards, she messages him about giving the explosives to Sa'id and telling Rahim to stay away. Unbeknownst to her, Rahim and Omar sneaked away to continue with the explosive mission. Later, Jade overhears the conversation between Crane and Brecken, grieving about the death of Rahim (being infected) and runs from the room, upset about the loss of her brother.

Prior to both Crane and Zere getting captured by Rais in The Pit, Zere reveals that he gave his research for the cure to Jade, hoping that it can be delivered to Camden in Sector 0, also known as Old Town. Prompting him to search for her in Find the Embers, Crane tries to radio Jade with no luck. Troy, having contact with Jade, radios her and allows Crane to talk to Jade and try to reason Rahim's death, even revealing to her that he is a GRE operative. Unfortunately, this angers Jade even more (due to her blaming Crane for her brother's death) and then ceases all communication with him. Troy tells him that Jade was last seen at the Harran University, setting up the next mission Higher Education. At the University, he asks the survivors about her, but discovers that she left the University and left a photo of Amir behind for Crane, saying "not again" which may hint that she knew Amir was a GRE Agent and was implying that she didn't want to get close or know another GRE Agent Like Crane.

After Crane sets off the detonation in the apartment buildings in Public Face to send the message that there's survivors in the city, Jade (Having being told by Troy about Crane looking for her,the trouble he went through and what he's doing to stop the Ministry) recognizes this and contacts him to meet her at Emerald Canal. In Rendezvous, Crane finds that Jade was kidnapped by Rais and was taken to the Museum, forcing Kyle into a confrontation. During The Museum, he finds Jade weakened and infected and Rais tosses one shot of Antizin to Jade and Crane, forcing them to choose who will live and who will turn. After Jade refuses the shot, Crane then suffers from his infection and renders him unconscious. While suffering from the virus's effects, Jade reveals to Crane about some information; she knows that he wants to save her, but its too late for her to be saved. She initially blamed Crane for Amir's demise as well and wanted to kill him, but realized that everyone's life is finite and there's no denial for it, and the only thing possible is that what happens in between must count. She also says that she wants to sacrifice her life to save everyone in Harran. About herself, she says that was born premature and the doctors were thinking she wasn't going to live, but she struggled and worked until she became a champion and thus, was given the name "The Scorpion". She concludes that she wants to save him and that he must let her go, by saying that everyone's life is finite just like Amir.. Crane then hallucinates Jade turning into a Viral and attacking him, when in reality Jade was actually trying to inject him with the shot. Jade then tells Crane to remember the promise that he made (Crane never agreed with the promise as it was that Crane was the one that kills Jade when she turns) With her remaining strength left, she attacks Rais's bandits before succumbing to the virus herself and turning into a Viral. Turned, she attacks Crane before he mercifully kills her by snapping her neck and respectfully closing her eyes.

During the story mission, Rendezvous. Rais reveals that she was bitten in the ankle by a infected that he let in just to see Jade fight in. This causes Rais to give only one vial of antizin to both of them and Jade sacrifices herself to give the vial to Crane, however this causes Crane to hallucination because of his infection. After waking up, four guards are killed by Jade but during this fight, she turns into a viral and is peacefully put down by Kyle.

Jade is often considered to be extremely level-headed when compared to the other leaders of The Tower, such as Brecken and Rahim.

Where Rahim is the idealistic, glory-seeker and Brecken is the passionate, but reluctant leader; Jade understands more than anyone the sacrifices that must be made in the name of survival. It was she that ordered the 18th floor of the Tower to be sealed off when infection broke out, despite her remarks that there were still a few children down there. But while she may appear rather brutal in her decision making her actions reflect the needs of the many over the needs of the few, she is one of the first truly grounded characters that Crane will meet. Her harshly realistic take on the situation at hand stems mainly from her desire to protect her younger brother Rahim, who she views as extremely brash and headstrong, making her one of the few of the main cast to have such an emotional attachment. 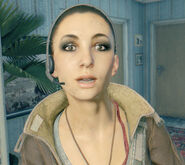 Jade and The Tower survivors discussing plans in Brecken's headquarters.

Retrieved from "https://dyinglight.fandom.com/wiki/Jade_Aldemir?oldid=25614"
Community content is available under CC-BY-SA unless otherwise noted.