The Infected, sometimes known as zombies[1], are the primary enemies in Dying Light and The Following DLC.

The Infected are people who have contracted the Harran Virus, which spread throughout the entire city of Harran[2], and failed to suppress the symptoms with Antizin. They possess reduced higher brain function, attacking and subsequently infecting any living targets around them on sight, mainly with their arms or with handheld weapons. The combat system in Dying Light allows the player to dismember and incapacitate Infected, reducing their offensive capabilities or even completely preventing them from attacking.[3]

The most common Infected share similar biology to humans. When striking biters with blunt weapons it is possible to determine that their bones are structured almost identical to uninfected humans. However, the Harran Virus can alter the infected's biology when the sun goes down, increasing their motor coordination and sensory capabilities to make them incredibly deadly hunters.

Special infected are a much different story; in these cases, the Harran Virus causes severe mutations, from the UV-vulnerable Volatile to the physically enhanced Demolisher. It is unknown what determines the rate at which mutations occur. However, it is speculated such would require either significant time to alter their biology or the mutagenic rate is rapid and requires vast amounts of energy to generate new cells, causing their increased aggression and hunger. This is, however, not confirmed.

In Dying Light, the behavior of the infected depends on the «Day/Night cycle». During the day, the infected are sluggish and cumbersome, and are unable to climb or run after the player (except for Virals). During the night the infected are stronger and more agile making exploration more dangerous for the player. There are also multiple types of Infected which come out only at night, like the Volatiles.

In Dying Light: The Following

Concepts of a male Biter

Concepts of a female Biter

Final concept of the Goon

Final concept of the Demolisher

Concepts of the Bomber

Concepts of the Toad

Concepts of the Bolter

Concepts of the Screamer

Concepts of the Toad and the Volatile

Concept of an unused Infected 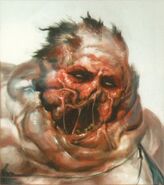 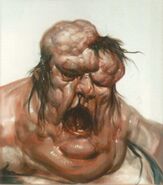 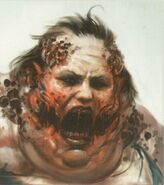 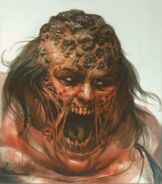 A group of Biters in the game