Harran, contains plot and/or ending details of Dying Light and all its related media. Proceed at your own discretion. 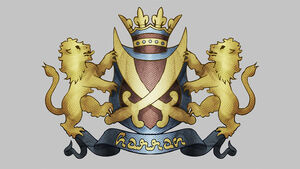 Harran[1] is a city in Turkey and a major location within the game of Dying Light. The distant skylines and high-rise buildings gives a sense of enormity and depth to this urban structure. Like most major cities and urban hubs some parts of Harran are wealthy and affluent while other parts are not so prosperous. During the central campaign, and the side missions, you will be traversing these two major areas of Harran's urban jungle in order to stay alive.

First mentions about Harran have been found in ancient tablets from the 9th century BC. It is also the most probable date for founding the first settlement in this location. One of the earliest inhabitants were Carthaginian merchants who settled down at a source of fresh water, today known as Emerald Pond. The oldest building that survived to modern times is the stronghold at the lake, now housing the City Museum. The stronghold is estimated to have been built in the 4th century BC by the Romans. Not much younger are the City Walls, which together with the stronghold formed the city’s main defenses.

The Walls survived intact for many centuries, but were partially destroyed in the 11th c. AD. The region had been struck by a series of severe droughts that lasted for at least twenty years. The droughts had led to famine. Eventually, rebellions had broken out destroying large parts of Harran in their wake. The City Walls were then rebuilt in 1530, many years after the rebellions had ended.

For the next 200 years Harran experienced a relatively calm period of steady development under the Turkish rule, as any uprisings were swiftly nipped in the bud. The symbol of this prosperous period is the Academy of Harran, founded in 1720, which turned the city into an unofficial intellectual capital of the region. The prosperity came to an abrupt end at the beginning of the 19th century when a massive fire consumed the southern districts. In a matter of weeks, the area of the city was halved, leaving the remaining districts surrounded by ashes and wastelands. The burnt down half was not reconstructed until dozens of years later as the Ottoman Empire gradually had lost interest in the city.

The turning point for the city were the world wars. Firstly, no battles were fought in the immediate vicinity of Harran, which saved its population and precious architecture from destruction. Secondly, after World War I the city became partially independent due to the collapse of the Ottoman Empire and birth of the Republic of Turkey. The independence was then reinforced at the end of World War II, turning Harran into a self-governed city-state.

Sometime in 2014, the city of Harran was overwhelmed by an unknown viral epidemic that was later known as the "Harran Virus".[1] The ministry of defense and government of Harran established a quarantine over the city as the affliction began to spread. Though the populace began to dwindle and the number of infected outnumbered the living, a Global Relief Effort was established to provide supply drops including the antiviral drug antizin to sustain what few survivors remained.[1]

Early in the outbreak, Kadir Suleiman was hired to maintain peace within the city. When the outbreak worsened and Suleiman's brother was killed, Suleiman stole a file from the GRE and went underground. He adopted the name "Rais" and established a powerful gang of ruthless murderers and thieves, and hoarded the city's dwindling resources for himself.

However, it was the opinion of the Ministry of Defence that stricter actions be taken against the Harran Virus beyond a simple quarantine protocol. As the situation grew more dire, the question of whether or not survivors still remained in the city arose.[1] As such, the ministry devised a plan that involved bombing the entirety of Harran to destroy both the infected and the source of the outbreak itself.[1]

The GRE sent operative Kyle Crane into the slums of Harran to find Suleiman and recover the file. Crane was initially attacked by Tahir and members of Rais's gang and then by the infected, but he was rescued by survivors from a group inhabiting a tower in the slums. Crane ingratiated himself to them, performing difficult and dangerous tasks to recover resources and improve the community's defences as he continued his clandestine search for Suleiman. When Crane informed the GRE that Rais and his gang were hoarding Antizin for himself, the GRE cut off further Antizin drops in order to to provoke a confrontation between Rais and Crane. Crane was able to obtain a small amount of Antizin by performing tasks for Rais's second-in-command Tahir, shaking down other survivor communities in the slums for supplies and repairing a radio tower. Crane's success allowed him to identify Rais as Suleiman without blowing his cover, but it put the Tower residents in dire straits. Desperate for Antizin, Crane and Tower resident Jade Aldemir raided a supply depot belonging to Rais. Though they found no Antizin, they obtained explosives.

Tower survivor Dr. Zere asked Crane to obtain samples of a special kind of infected, created when Zere seeded the city with food treated with modified DNA. While Crane recovered the samples, which Zere found promising, Jade's brother Rahim attempted to destroy a nest of Volatiles with the captured explosives. He died in the attempt, although Crane completed the mission on his behalf. Although Crane had offered to transport Zere's research to the better-equipped Dr. Camden on the other side of the city, Jade took the task upon herself to get away from Crane, whom she blamed for her brother's death. Shortly after Jade departed, Zere was kidnapped by Rais's men. Crane pursued them, but was captured himself. He was forced to fight numerous infected in a pit for Rais's amusement, but he managed to injure Rais and escape the pit. He found Zere dying from an injury inflicted by Rais, and was unable to save him.

Crane attempted to follow Jade to Old Town by traveling through the sewers. He was offered passage by a survivor group calling themselves the Saviors, ostensibly in gratitude for injuring Rais; in reality, Rais had coerced the Saviors into helping him to set an ambush for Crane. Crane survived the ambush and continued to look for Jade. At this time, survivors in Old Town became aware that the GRE had instigated a cover-up, telling the outside world that there were no survivors left in Harran. This cover-up would allow the Ministry of Defence to destroy Harran to contain the outbreak. Crane attempted to signal the outside world by igniting certain apartment units in a high-rise building, creating a visible pattern that could only be the result of conscious action, but the high-rise was almost immediately destroyed by fighter jets. Crane then re-activated a radio mast and made a broadcast from the top, telling the entire world about the survivors in Harran.

Crane learned of Jade's whereabouts from other survivors and went to meet her, but found that she had been kidnapped by Rais's men. Crane attempted to rescue her from Rais's stronghold in an Old Town museum, but Jade had been bitten and Crane was forced to terminate her. Immediately afterward, he was confronted by Tahir; Crane killed Tahir and recovered from his body the tissue samples that Jade had been carrying to Dr. Camden. However, Rais still had the rest of Zere's research.

Crane delivered the tissue samples to Camden, who analyzed the samples and found the results extremely promising, but when Crane attempted to relay this information to the GRE, he was instead answered by Rais. Rais demanded a final showdown at the top of his tower in the Slums, and told Crane that he had contacted the GRE himself to negotiate for extraction, using Zere's research as a bargaining chip. Crane ascended the tower and killed Rais, but refused to hand over the data to the GRE, knowing that as long as the data was in Harran, the Ministry of Defence could not destroy the city.

The data was subsequently turned over to Dr. Camden, who continued work on a cure.

Events of The Following

Dr. Camden developing a permanent cure more difficult than he had anticipated. Antizin supplies within the city ran out before he made any progress. When the survivors in the Tower received word of a community in the farmlands outside the city proper who appeared resistant to infection, Kyle Crane was sent to investigate. Crane reached the farmlands and encountered the Children of the Sun, an insular group that distrusted outsiders. The Children of the Sun were adherents of an old, suppressed religion that had existed in the region for centuries. Their influence in the rural areas surrounding Harran increased dramatically following the outbreak, due to the apparent ability of their priest class, the Faceless, to go among the infected unharmed. They held faith in an individual known as the Mother, who they believed would awaken the God of the Sun to end the outbreak.

Crane ingratiated himself to the Children of the Sun as he had done with the inhabitants of the Tower, earning their trust by performing essential but highly dangerous tasks. He eventually earned the trust of the Faceless themselves, who revealed that their apparent immunity to the infection was due to a chemical that had been stockpiled by the military. The Faceless revealed this information to Crane so that he could track down the location of a missing convoy containing the last supplies of the substance.

Crane learned that the convoy had been ambushed by the remainders of Rais's gang, who sought to control the supply of this precious material and to usurp the power of the Mother over the community. Crane successfully recovered the last vials of the substance and succeeded in reaching the Mother before the bandits could find her. The Mother revealed to Crane that, while the substance prevented people from becoming zombies, exposure would eventually convert people to something worse - a form of Volatile that retained its human mind when exposed to light, but became a vicious, mindless monster in the darkness. The Mother, who had taken a massive dose of the substance, became such a creature instantly, although the trappings of religion allowed her to hide this from her followers.

The Mother advised Crane that, since the cure he sought was no cure at all, the only way to stop the plague would be to destroy Harran entirely.

The End of Harran

The Following has two possible endings. In one ending, Kyle Crane escapes Harran but succumbs to the effects of the Mother's chemical. Harran is thus spared immediate destruction, but its fate remains unclear, as antizin supplies within the city have been totally depleted and a Night Hunter (Crane) breaking through the quarantine may had convinced the government and the military to go through with firebombing Harran anyway.

In the other ending, Kyle Crane successfully triggers a nuclear detonation, destroying the surrounding countryside and all of Harran.

Based on Dying Light 2, The "Night Hunter Ending" is most likely canon.

It is revealed the containment of the virus failed, the Harran virus manages to spread from Harran to the entire world, bringing the Fall, the destruction of civilization.

Known locations are areas that you will explore throughout the game of Dying Light. Most of these areas listed contain main or side mission objectives.

Unknown locations are destinations in which you as the player will never explore but can see on the horizon.

Retrieved from "https://dyinglight.fandom.com/wiki/Harran?oldid=27880"
Community content is available under CC-BY-SA unless otherwise noted.