Shot in the chest with a crossbow by Lawan. (Determinant)

Hakon is a character featured in Dying Light 2 Stay Human.

Hakon is a member of the Nightrunners, a faction that used to help people even in the dangers of the night but eventually disappeared.[1]

Aiden Caldwell first meets Hakon as he enters the City, where Hakon saves him from being hanged by the people of the Bazaar. Hakon then gives Aiden an inhibitor and helps him obtain a biomarker.

Hakon agrees to help Aiden find passage through to the Central Loop, which for the first part of the game is locked off and being protected by the Peacekeepers.

Later, he confronts Aiden in the church and demands him to give the key to him, but Aiden refuses. Depending on the player’s choices, Hakon will either die at the hands of Aiden himself in self-defense, Lawan, who showed up for revenge, or be spared and saved.

Hakon’s survival will also determine Lawan’s fate towards the end, where if Aiden decides to let Lawan destroy the missiles before they launch, Hakon will save her from certain death if he is alive. Otherwise, Lawan will end up sacrificing herself to save Villedor.

If Hakon is alive, he can end up traveling with Aiden outside of Villedor when the latter leaves the city, like Hakon desired.

If Aiden decides to fight Hakon in the church, they will engage in combat, with the Renegades assisting Hakon, but he will be beaten in combat. Hakon then attempts to kill Aiden once more to take the key from him, forcing Aiden to finish him off.

If Aiden initially refuses to fight, Lawan will arrive after the fight and decide to kill Hakon herself. If Aiden does not stop her or allows her to kill him, Lawan will shoot him in the chest with a bolt, with Hakon painfully dying from the wound. 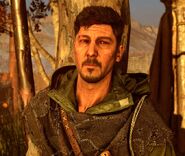