Gazi is a character featured in Dying Light.

He is a developmentally disabled man living in the southwest area of the Slums, in a small shanty village under an overpass. He had previously lived with his mother, though she passed away two years prior to the outbreak. However, he still pretends she is alive through an effigy of her in his living room, and prior to the outbreak he had even continued to collect her medical prescription from the local pharmacy following her death.

Following the main story quest First Assignment, a group of runners led by Harris Brecken are ambushed by Kadir "Rais" Suleiman's thugs. The runners are killed and Brecken is badly injured, receiving a head wound that later causes him to have seizures. Kyle Crane is approached by Doctor Lena in the Tower to pay a visit to Gazi in an attempt to retrieve his mother's anti-seizure medicine. However, when Crane meets with Gazi, he refuses to assist him on account of it being his 'special day' with his mother. Initiating the Mother's Day quest, he tells Crane to retrieve a box of chocolates as well as the film Charly from a nearby Bluebox Video store. Once this is complete, Crane will have to break into Gazi's house via a hatch on the roof accessed by climbing the overpass in order to take the stash of medicine. 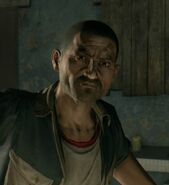 Gazi upon answering his door.

Gazi and his 'mama'.

Gazi and his 'mama' watching TV.
Add a photo to this gallery

Retrieved from "https://dyinglight.fandom.com/wiki/Gazi?oldid=26926"
Community content is available under CC-BY-SA unless otherwise noted.