Explosive Oxygen Tanks
The Gas Tank is a common infected-type in Dying Light and returned as Monster in Dying Light 2 Stay Human under the new name Hazmat.

Gas Tanks were initially part of a special cleanup unit that was sent into the city of Harran and were subsequently infected. These former unit members now lurch among the very same infected that they were tasked with neutralizing.

Gas Tanks are essentially besuited Biters, entrapped within a durable hazmat outfit. Their most signature feature is the bright red oxygen tank strapped to their back. A direct impact to this tank, whether with melee or a ranged attack, will set it to detonate in a few seconds. The Gas Tank will explode loudly and violently, seriously damaging anything within a small radius and typically attracting Virals to its location.

Their suits prevent them from latching onto the player to bite them, but also makes them fireproof and significantly more durable than typical zombies. They are also resistant to dismemberment and decapitation, and much more difficult to knock down through melee strikes.

Two variants exist, with the most common being yellow-suited ones that appear all over the Slums and Old Town. The white-suited ones appear very infrequently, and tend to drop medicinal-related supplies such as alcohol or gauze.

During the night, Gas Tanks can undergo a rapid and sudden transformation into their Night Walker variant, turning into screaming, sprinting suicide bombers that will charge the player and explode. This variant is not exclusive to nighttime and can also appear during Night Hunter invasions, Bozak Horde challenges, and specifc points in the main story. 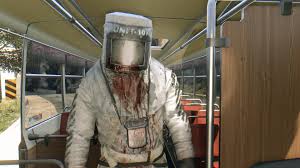