Large chunks of cement
Heavy objects
Charge
Arms
The Demolisher is an uncommon Infected in Dying Light and Dying Light 2 Stay Human. It is also notably the first boss to fight in the game.

The Demolisher is the largest infected type encountered by the player. Its strengths lies in its ability to break down walls and lift and toss vehicles across far distances.[1] When a Demolisher spots the player, it will charge them. However, the Demolisher is quite slow and can be easily avoided prior to its charge.[1]

The Demolisher is made due to a failed development of the virus. Physically, the Demolisher is big but almost as intelligent as the Biters. Its attacks have longer windup compared to its smaller kind, making for an easier time dodging and even creates opportunity for one to lure the Demolisher's attacks to disperse nearby Biter groups.[1] Also, if a group of infected are chasing the player, with little timing and positioning one can lure them into the Demolisher's car toss attack as the player dodges it.[citation needed]

There is also a special Demolisher in Old Town dubbed Sergeant Deathrow who has a random encounter with 2 Toads VS 2-3 friendly survivors. A gas mask variant, which was added November 10th, 2019, can be found in Old Town as well, sometimes paired with another Demolisher. They have a gas tank on their back that will be set off when hit, much like the Gas Tank variant of the Biters.

In the base game, they only appear in Old Town, with the exception of the boss battle in Rais' Stadium. In Dying Light: The Following, Demolishers with green military-styled camouflage appear far more commonly and unconstrained by urban environments, making them an even greater threat.

The Demolisher was once part on the Harran police force riot control unit, who took part in helping the people of the city and fighting the infected. After getting infected, he mutated into a muscular brute, gaining the ability to tear an entire chunk on concrete from the roads and throw at survivors with ease. Still wearing his riot uniform and face helmet, he is able to survive numerous strikes from melee survivors and ranged weapons.

In Dying Light 2 Stay Human Demolishers have received changes in appearance. They no longer look like former soldiers/policemen, but as civilians. On their head you can see the remains of hair. Their lower jaw is similar to those that belong to Volatiles. the infected will act similarly to the Dying Light predecessor, but will have a new attack. Demolishers will stomp their foot towards Aiden, causing a shockwave to knock the player down. They also have giant blisters on their arms, giving the player an advantage of attacking them at their weakpoint.

Two notable Demolishers have been discovered in The Following:

Final concept of the Demolisher

A render of the Demolisher 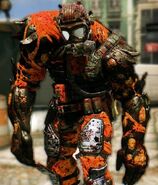 Gas mask variant of the Demolisher 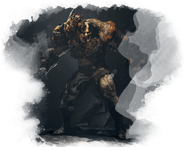 The Demolishers taunt animation is similar to the Butchers intro animation in Dead Island.