Biters are victims of the Harran Virus who have been symptomatic for a long period of time, resulting in significant degradation of their bodies as well as major loss of movement, speed, and coordination. They form the majority of the shambling infected throughout Harran. Like other infected, they will react to, and eat, the living. They are visually distinguished from Virals by their partly or significantly rotted bodies, as well as their complete hair loss. They attack with wide, flailing swings or by grappling and biting their target.

Power XP rewards for killing different archetypes of Biters are as follows:

The plus indicates that a little more XP is occasionally awarded by chance.

Biters are most dangerous in groups where their slow speed is less of a disadvantage. Biters are also fairly quiet at a distance and can be difficult to spot in darker or noisier areas, but can be heard by their heavy breathing and moaning when up close. If hit by fire-type weapons they will light on fire, Toxic Biters will explode, causing a small amount of poison damage to the player and attract the attention of other infected.

Some Biters can occasionally be seen holding simple melee weapons such as hammers, wrenches, pipes, and police batons, etc. Infected police officers, industrial workers and even some of Rais' Men can be seen still carrying these tools. Biters will throw these tools at the player or other survivors if they are at a distance, and will attempt to hit their target with them at close range, causing a larger amount of damage than their standard attack. Biters will often drop these tools after being knocked down, however. Side note: Police officer Biters will react to a dropkick as if it were a standard kick and they cannot be killed with Takedowns — except for drop attacks, this is because of the police hat they often wear, the same applies to Gas Tanks, however they can still be knocked down.

During the night, Biters have a chance to roar to alert nearby Volatiles, the sound they emit is very similar to a Goon's roar when attacking. They will also spontaneously mutate into Night Walkers, either by loud noises — such as the roaring of Biters and explosions, the player is in pursuit running from Volatiles and passes by Biters, or it just happens out of nowhere. This gains Biters the ability to run and mantle up obstacles like Virals. Night Walkers will also alert all nearby Volatiles upon spotting the player, initiating a pursuit. It takes a few seconds for the mutation to occur, during which the biter will spasm and emit yellow vapors.[2]

Exclusively seen in The Following within The Countryside, a new variant of Biter appears titled the Bruiser. While the Bruiser is arguably similar to the early stages of the Goon, Bruisers more likely appear around Biters, therefore possibly indicating that it is more Biter-esque. They don't carry around weapons like most Biters do, but they have a powerful hitting attack that can knock down and stun the player. They can be dismembered like regular infected, although it takes more strikes. Bruisers appear to be shirtless most of their time, with shorts or jeans to wear.

As of yet, only one Biter Freak has been discovered.

Besides the common Biters found throughout the game, a number of variants can be found who are either unique to a specific location, or have unique attributes. 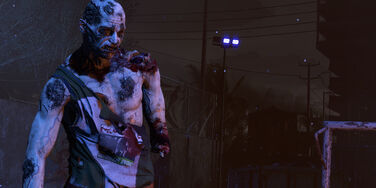 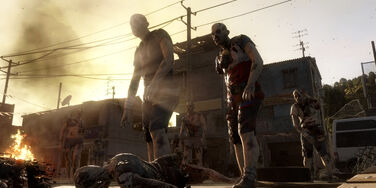 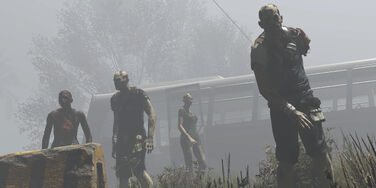 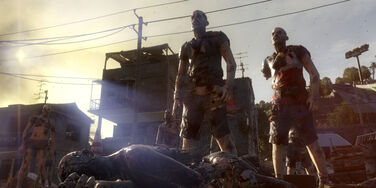 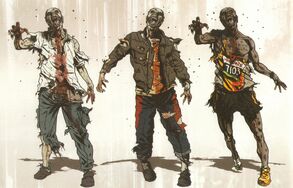 Concepts of the male Biters 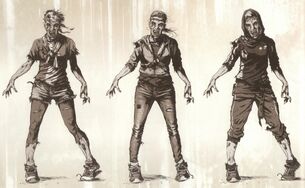 Concepts of the female Biters 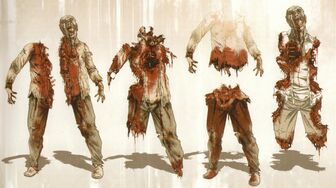