Bento is a character featured in Dying Light.

He is a survivor and drug producer based out of the Drug Store in the slums of Harran. He and his gang have been producing fake Antizin using their own formula, which turns out to be toxic in nature, and repackaging it into Antizin bottles. Yusuf is a scout at the Tower who has been helping Bento sell the fake Antizin to survivors, including Bahir, who is nearly killed after a negative reaction to the drug.

When confronted by Crane, Bento denies any wrongdoing, insisting that his formula is better than standard Antizin, giving "superpowers" to users. Unfortunately, Bento was warned by Yusuf about Crane's impending arrival, so he is able to prepare himself and his men. He and his gang turn hostile and are all killed in the ensuing fight, effectively ending the fake Antizin operation. 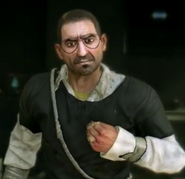 Retrieved from "https://dyinglight.fandom.com/wiki/Bento?oldid=24682"
Community content is available under CC-BY-SA unless otherwise noted.