Be the Zombie is a free downloable content for Dying Light. It is one of the playable multiplayer modes available in the game.

Initially set as a pre-order bonus before coming free to players, Be the Zombie is a gamemode where players can invade other player's games, if enabled.

Invading players control the Night Hunter, a superior player-controlled infected with an unlockable skill tree, to defend its nests (serving as a spawn point) and kill any attacking player survivors until their limited lives run out. As a human survivor, the player will be alerted of the Night Hunter invading and must search and destroy the nest to prevent it from respawning. Once the player controlling the Night Hunter finishes synchronizing with the survivor's game, both players will be placed at random places around the map, the nests will spawn, and the map will automatically be set to night time. While only one player can control the Night Hunter, human survivors can be allowed up to four players.

When playing the Night Hunter for the first time, they will be put and be introduced into a tutorial before they can select matchmaking to find a player to invade.

Combos and Strats for the Hunter 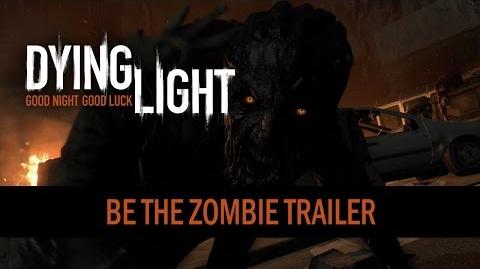 Dying Light - Be The Zombie Trailer
Dying Light Playing as the Zombie - IGN First
Dying Light Devs Play Be the Zombie Mode
Dying Light The Following Official Be the Zombie The Showdown Trailer
Add a photo to this gallery
Retrieved from "https://dyinglight.fandom.com/wiki/Be_the_Zombie?oldid=27283"
Community content is available under CC-BY-SA unless otherwise noted.