Slums
The Tower (after Protect Babar)

"Babar is off the leash!"
—Babar during combat.

Babar Kizil is a character featured in Dying Light.

He is a surivivor found within slums of Harran. He is found during a random encounter in which he can be found near the warehouses.

When approached by Kyle Crane, he warns him that many people are in danger on account of him being a lycanthrope, better known as a werewolf. He asks that Crane protect him as he collects garlic, Wolf's Bane, and cinnamon so that he might craft a potion and cure himself. Kyle is able to protect Babar as he searches three locations and crafts his potion. After drinking it and declaring himself cured, Kizil is escorted by Crane to the Tower.

He thanks Crane and informs him that many lives were saved as a result of his actions. He rewards Crane with a blueprint for the Exorcist. 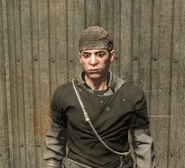 Babar Kizil's appearance prior to the Enhanced Edition.
Add a photo to this gallery
Retrieved from "https://dyinglight.fandom.com/wiki/Babar_Kizil?oldid=25267"
Community content is available under CC-BY-SA unless otherwise noted.