Amir Ghoreyshi, contains plot and/or ending details of Dying Light and all its related media. Proceed at your own discretion.

Little is known about Amir's early life. He is an agent with the Global Relief Effort and was sent to Harran following the outbreak as part of their mission in the quarantine zone. During the epidemic, he allied himself with Harris Brecken and his survivors at the Tower. During this time, he developed a relationship with kickboxing world champion Jade Aldemir.

He was among the survivors seeking refuge within the Tower, and worked as one of their runners.

During the main story quest Awakening, Amir and Jade rescue Kyle Crane immediately after his failed airdrop into the city; set upon by thugs and infected, Amir swoops in to get Crane off the street. However, the infected follow them and he is killed attempting to hold them off inside Mikla's Bikes.

It is later revealed that Amir, like Kyle, was a Global Relief Effort agent operating on their behalf in the city. He was tasked with escorting Doctors Camden and Imran Zere out of the city, but they were separated and Ghoreyshi and Zere took up residence at the Tower. While Camden remained trapped in Old Town, a group of survivors led by Spike agreed to protect Zere and his mobile laboratory within a secure courtyard.

Shortly after ​​​rescuing Kyle Crane, Amir holds back a horde of Infected attempting to pursue Crane and Jade. However, he is only able to hold the biters off long enough for the other two to escape, at which point he is overwhelmed and killed by Infected.

Amir's build is of a large man; tall and muscular. He is seen wearing boots and cargo pants with knee-pads, as well as a short-sleeve shirt. During his brief appearance, he was armed with a machete.

Amir came across as a dedicated and straightforward person. Jade described him fondly, and many at the Tower would remember him as a skilled runner and valuable asset to the enclave.

Amir attempting to hold off the infected inside Mikla's Bikes. 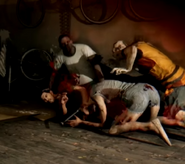 Amir is mauled to death by infected.
Add a photo to this gallery

Retrieved from "https://dyinglight.fandom.com/wiki/Amir_Ghoreyshi?oldid=27197"
Community content is available under CC-BY-SA unless otherwise noted.