The American 9mm Pistol is a firearm in Dying Light. It can be purchased from shops, found in loot caches and rarely, in the trunks of police sedans and vans.

Like most firearms, the American 9mm Pistol was initially a rare find, however its common availability midway into the game allows it to be collected and sold in large quantities to shops.

There are two variants of the American 9mm Pistol included in the Enhanced Edition and in The Following. 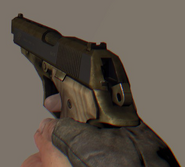 Add a photo to this gallery
Retrieved from "https://dyinglight.fandom.com/wiki/American_9mm_Pistol?oldid=26442"
Community content is available under CC-BY-SA unless otherwise noted.