Aiden Caldwell, contains plot and/or ending details of Dying Light 2 Stay Human and all its related media. Proceed at your own discretion.

Aiden Caldwell is the protagonist of Dying Light 2 Stay Human.

It is unknown when and where exactly Aiden was born but it can be theorized that he was born either in the year 2013 or 2016 before or during the Harran Virus pandemic that eventually spread across the world. At one point his father saved his life and told him never to forget who he was. Aiden Caldwell is an infected survivor in an infected world. He has agility reminiscent to an Olympic athlete, and brutal combat skills that make him a powerful ally and a valuable commodity in this dangerous world. He can achieve things no one else can, enter places no one else dares. With his unique abilities, Aiden has the power to be an agent of change within this decaying metropolis.

Aiden is a member of an outcast group known as the Pilgrims. They constantly wander the world and are compared to ronin and Old West desperadoes. Traveling over 2,000 kilometers (1,242 miles) from Crossdale River,[1] Aiden goes to the City in search of his thought to be sister, Mia, who is the key to the past he cannot remember and who Aiden truly is.[2][3]

Aiden dressed in the Ronin outfit. 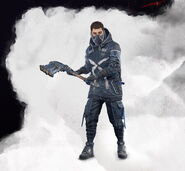 Aiden dressed in the Peacekeeper outfit.