Near the Black Serpent Bazaar (Slums)
The Tower (after Protect Ahmet)

Ahmet is a character featured in Dying Light.

He is a survivor found within slums of Harran. He is found during a random encounter in which he can be found across the street from the Black Serpent Bazaar.

When approached by Kyle Crane, he begs him not to shoot and proclaims he is no longer a member of Rais' Gang. He admits he joined them two months earlier, but does not approve of the gang's brutality. Ahmet explains he had previously attempted to join the Tower, but as he was dressed as one of Rais' Gang he was shot at and forced to flee.

When Crane agrees to escort him to the Tower and ensure his safe arrival, Ahmet offers to lead Crane to a stash of loot as a form of payment. Ahmet first travels to the Holy Year Tunnel, but proclaims it looted. Instead he leads Crane to the trainyard where a group of thugs are guarding a train car. After they have been killed, Ahmet retrieves his stash and asks to be brought to the Tower.

Once safely in the lobby he thanks Kyle and rewards him with a blueprint for the Exorcist.

"Two ... maybe three RPGs should kill it."
—Ahmet referring to a Goon.

"Me against them is not going to work."
—Ahmet during combat.

"I can't stare them down much longer!"
—Ahmet during combat.

"Ahhh! They've already cleaned this place out. But I know one they don't know about."
—Ahmet after discovering his spot looted.

"Everything is still here. Get me to the Tower and I'll give you your share."
—Ahmet after discovering his second stash intact.

"I never would have made it without you."
—Ahmet to Kyle, after reaching the Tower.

Ahmet as he appears in the Enhanced Edition. 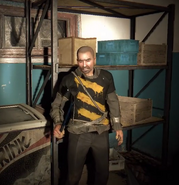 Ahmet as he appeared in the original version.

Ahmet's location on the map.
Add a photo to this gallery

Retrieved from "https://dyinglight.fandom.com/wiki/Ahmet?oldid=26589"
Community content is available under CC-BY-SA unless otherwise noted.